Painting on ceramics, an ancient craft with themes inspired from the city of

Nicaea in Asia Minor and the Greek island of Skyros.

In our workshop, this art continues to evolve through fire, with love and devotion. 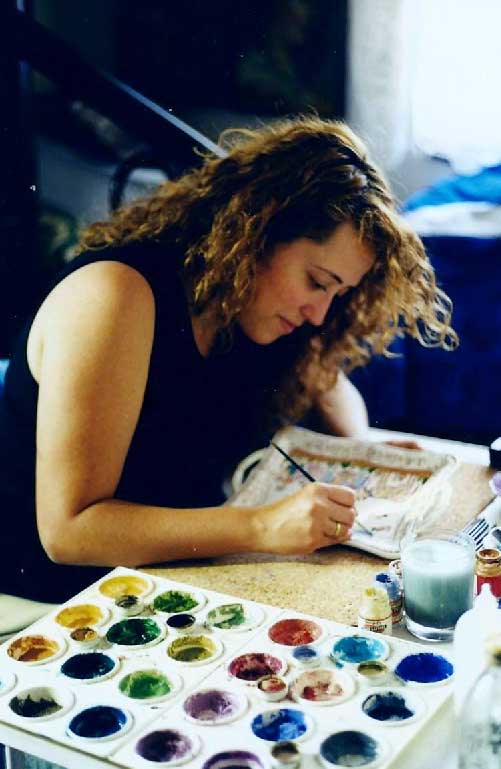 ·        Our painting is completely done by hand, hence the uniqueness of our plates.

Be the artists for your loved ones.

Just choose an object and adjust a theme according to their personalities.

A gift they will never forget!

*Feel free to ask me and don’t forget, we need 15 days to prepare it.

Tiles singles or doubles on wood.

The colors can be changed according to your preference.

Beginning with the Seljuk era when "chini" tiles were used in architecture as decorative elements in buildings; this art was favoured by the Ottomans as well. Iznik pottery was the official gift of the Ottoman Palace to many other foreign dignitaries while the "chini" tiles were used in palaces, mosques and other edifices that have survived till today. The designs were created in the "nakkash hane" –art centre of the Ottoman court and were used on tiles, pottery and all Ottoman handcrafts.

Once the prized art of the empire; lost in the mists of time, Iznik "chini" tiles and ceramics have been recreated after a period of 400 years, following years of research and countless experiments by Iznik Training and Education Foundation which was established by Prof. Dr. Işıl Akbaygil in 1993. The founding aims of the Iznik Foundation were to publicize the culture and artistic assets of Iznik and its surrounding communities, to activate the current potentials of the area, to classify both existing information and any new information obtained regarding the traditional art of Iznik and to pass this knowledge on to current and future generations through training and education.

Iznik Foundation workshops have been successful in reproducing Iznik tiles and pottery of the same high quality as their predecessors; with the same ancient traditional methods of 16th century that constitute the zenith of this art form in world ceramic literature. Today the "chini" tiles and pottery are totally handmade while preserving traditional quality and aesthetic form but utilizing current technology systems for research.

Iznik is an important production centre in the history of ceramic arts. The archeological excavations around Iznik, revealed the importance of ceramics in prehistoric cultures. Black and red prehistoric ceramic fragments from Ugucek Tumulus, Karacakaya, Abdulvahap Hill and Muskule villages are evidence of ceramic production in Iznik as far back as BC.7000. 7300 year old examples from excavations in Ilıpınar Tumulus and Hacılar Hill can be viewed in the Iznik Museum of Art.

Monogrammed ceramics are seen among these ceramics. Although Byzantium paste characteristics resemble those of Roman ceramics, Byzantium decoration techniques show similarities with Anatolian ceramics of the Middle Age.

In the excavation of "Iznik Kilns" and "Iznik Roman Theatre" some Seljuk ceramics from the Middle Age were discovered. But it is not certain if they are local production or imported ceramics. Seljuk ceramics differ from Byzantium ceramics with not only the paste and glaze but also the decoration techniques.

Sultan Orhan Mosque was the first to use Iznik tiles as decoration. Green hexagonal tiles adorn the Mosque`s niche. Traces of mortar on the walls of Hagia Sofia suggest Iznik tile decoration. Besides these two 14th century Mosques, built in 1391 depict early examples of Iznik tile art with it's glazed bricks, embossed and mosaic tiles and minaret.

White and light grey paste replaced the Red paste as a result of technological improvement in the early 15th led to fame and İznik tiles were widely used throughout the Ottoman Empire.

A guild was organised by Kaşicibaşı for the Iznik tile-makers under the control and protection of the Ottoman Palace. Tiles adorned all important buildings in Istanbul and other cities. The same technology and decoration style dominated tableware as well. These different shaped ceramics especially drew the attention of merchants of Venice and Genoa. It is understood that the kilns outside the city walls were built to satisfy these requirements. After the 17th were no longer produced. The decline of economy, political and military authority century in the art of ceramics. Development in quality of the Ottoman Empire during that period has been the reason of this unproductive period. When the architectural activities of the Ottoman Palace was declined, it's protection over the tile-makers of Iznik disappeared along with the Iznik ceramic. The global interest and aesthetic understanding of the Iznik tiles and ceramics has led way to the "Orientalism" school in Europe during the 18th supported by merchants and travellers. European ceramists produced the copies of Iznik ceramics in England and France.